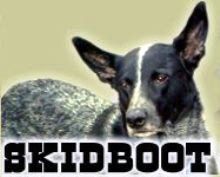 This Cowboy raised the Smartest Dog in America.

David resides in Quinlan, Texas and lives the modest life of a farrier (a specialist in hoof care who trims, balances and shoes horses). It’s hard work and takes a steady hand and a gentle, calm demeanor around the horses.

On Christmas Eve in 1992, David was working on his friend’s horses when he noticed a litter of pups in the barn. “I didn’t think you liked dogs,” David said to his friend. “I don’t. This stray female blue heeler (Bluebelle) came over here on Thanksgiving and started dropping puppies all over the yard. So I just picked them up and put them in the barn.” David hadn’t gotten his wife a Christmas present yet and decided a puppy would be perfect, so he picked one out and headed home.

Sometimes things happen in life we can’t always explain – a gut feeling that causes you to change your mind. David was half way home when he had second thoughts about the pup he had chosen. He turned around and went back to the barn. That’s when he picked out a pup standing by himself away from the other ones. At the time, David had no idea how that puppy was going to change his life.

Skidboot was named after a protective boot horses wear on their hind legs to protect the area above and behind the hoof during activities like barrel racing.

Skidboot was a natural at working on the ranch with David. “He did his job. He did it perfect and I didn’t have to teach him.”

Realizing that the ranch pup needed some discipline, David – who has a natural way with animals – started to train him. At the time, David was on the road participating in calf roping and steer wrestling events at rodeos and decided to take Skidboot with him so he could learn some manners. David and Skidboot began to form an incredible bond that would last fourteen years, until Skidboot passed away.

Having the kind of intelligence that just isn’t common in every dog, Skidboot proved to be one of the smartest dogs ever caught on camera, performing tricks that amazed audiences all over the US. His natural love of performing, combined with his bond with his trainer, made Skidboot famous, and gave him and David a life the man had only dreamed about.

I asked David how many tricks Skidboot knew. “Well, I never did like to call it tricks. He didn’t really do a trick, he just did what I said. I never did count, he was still trying to learn new things till his dying day. He was obsessive about trying to please me. He was constantly trying to be a human being. He just liked the challenge. You know that “sneaking up on the ball and backing away” thing he became famous for? David would tell Skidboot, “Now, on the count of three I want you to go fetch that ball.” After David would throw the ball he’d count, “One, two, 11, 12, 13, 26...,” but Skidboot wouldn’t retrieve the ball until David said the number three.

I don’t think a lot of people understood what that was about. That was about me trying to tell him what to do and then trying to trick him to see if he could keep from getting messed up. His goal was not so much to do what I said, but to prove to me I couldn’t trick him. He loved to be challenged.”

David made a video of Skidboot’s tricks and sent it off to “Pet Stars”, during it’s first season on the air. After winning the $25,000 prize, he went on to appear on the Oprah Show twice. Also, The Tonight Show with Jay Leno, The Late Show with David Letterman, Inside Edition and The Animal Planet. Skidboot has appeared locally at the Hunt County Fair and the State Fair of Texas.

David gives Skidboot credit for teaching him about life. “I treated Skidboot just like I would any other person. I would get letters and cards from people thanking me for teaching them about love, patience, understanding, forgiveness, and showing them about relationships. It took on a life of its own, and I realized there was something else going on besides a dog doing tricks.
From then on, it was “Hollywood, here I come” for Skidboot and David. "I was in a limousines in Beverly Hills, California – with my dog. I’m the luckiest cowboy ever.”

After numerous appearance on television shows, a short movie was made on Skidboot, which has been circulated on the web, and he even has his own book, “Skitboot: The Amazing Dog.”

Skidboot is world famous for his performances with owner David Hartwig of Quinlan. Recognized the “pet star of the world,” Skitboot has amazed thousands of people over the years with the his amazing talent to do “what he’s told to do.”

Skidboot’s health started to decline, however, after he was kicked in the head by a horse. It blinded him in one eye, then eventually, Skidboot went blind, and he had to retire.
Skidboot was 14 when he died on March 25, 2007. His legacy will live on in his You Tube videos and in the hearts of all who saw him perform.

“Never has a last minute, second thought Christmas gift ever shone so brightly as Skidboot.”

A screenplay has been written. "What better way to spend a midlife crisis than to do a movie about your famous dog.”

Skidboot lives on in his Legacy of the Puppy's that David is raising now in Quinlan, Texas. 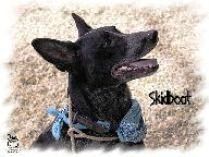